A podcast with an honest take on the current administration. 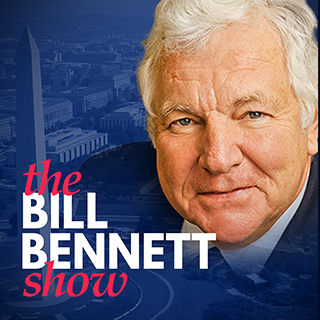 William J. Bennett is one of America’s most important, influential, and respected voices on cultural, political, and education issues. A native of Brooklyn, New York, Dr. Bennett studied philosophy at Williams College (B.A.) and the University of Texas (Ph.D.) and earned a law degree (J.D.) from Harvard. He currently serves on the Advisory Board of Udacity, one of the world’s leading online education organizations, as well as the Advisory Board of Viridis Learning, Inc. He is a Senior Advisor to HigherEducation.com, which assists colleges and universities in transitioning in-classroom curriculum to a digital, scalable platform. Dr. Bennett is also a member of the Trump Leadership Council, a private citizen advisory group to the president.

Over the course of his professional life, in education, government and the private sector, Dr. Bennett has succeeded in a trifecta of American institutions. He is an award-winning professor in academia, having taught at Boston University, the University of Texas and Harvard; he is a three-time confirmed executive in the Ronald Reagan and George H.W. Bush administrations including holding two cabinet-level positions, Secretary of Education under Ronald Reagan and the Nation’s first Drug Czar under the first President Bush. He was formerly the host of Morning in America, one of the largest national talk shows in the country, and is now host of The Bill Bennett Show podcast. He is an official Fox News contributor appearing weekly on some of the nation’s highest-rated cable TV shows.  He is also an experienced technology entrepreneur, having been the founding Chairman of K12.com a multi-billion dollar online education company.

In his various roles, Dr. Bennett is perceived—even by his adversaries—as a man of strong, reasoned convictions who speaks candidly, eloquently, and honestly about some of the most important issues of our time.

Dr. Bennett has written or co-authored more than 25 books including two New York Times number one best-sellers, one of them being the Book of Virtues, which was one of the most successful books of the 1990s. His latest book Tried By Fire: The Story of Christianity’s First Thousand Years has also quickly become a best-seller. His three-volume set of the history of the United States entitled America: The Last Best Hope, has been widely praised and adopted for use in schools around the country. The Sunday New York Times previously named Dr. Bennett the “leading spokesman of the Traditional Values wing of the Republican Party.” Although he is a well-known Republican, Dr. Bennett often has crossed party lines in order to pursue important common purposes.

Thanks to his government positions, his writings and speeches, and thousands of media appearances, William Bennett has had extraordinary influence on America’s political and social landscape. In many surveys and publications he has been named one of the most influential individuals in America. He is the recipient of more than 30 honorary degrees.

Dr. Bennett and his wife, Elayne, reside in North Carolina and Chevy Chase, Maryland and are the parents of two sons.

Caught up with my good friend Seth Liebsohn to review 2021 and discuss what we're watching as we begin 2022. thebillbennettshow.com

About a year ago

Recording another episode of my show NOW! Check out previous episodes at thebillbennettshow.com

About a year ago

Seth Leibsohn and I discuss everything from Simone Biles to critical race theory. How far is the divide in America? podcasts.apple.com/us/podcast…

Brian Kennedy and Joel Farkas joined the show to discuss how "wokeness" is infiltrating corporate American and it's implications. They also discussed how big tech companies are being used by the government to silence people. thebillbennettshow.com

New episode of my podcast will be released today! You can catch it and past episode at thebillbennettshow.com